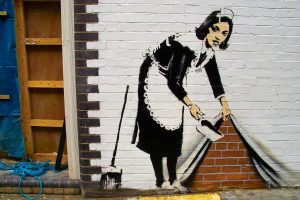 The English street artist, whose identity is still a mystery and whose name is often mistakenly misrepresented in Bansky or even Banski. During his artistic production, he realizes “reinterpretations” of masterpieces from the past, such as, for example, a personalized version of Monet’s Water Lilies pond, and Hopper’s Nighthawks.

In 2004, the artist had several British 10-pound notes produced, eliminating the queen’s face and replacing it with Diana’s. In addition, he transformed the characteristic text on the Bank of England banknote with the words “Banksy of England“. His “experiment” had a remarkable success, to such an extent that the banknotes became real unique pieces, which were subsequently sold on the Internet at very high prices.

Between 2002 and 2009 Banksy published 46 images on paper that he sold through his “print house” Pictures On Walls in Commercial Rd. (London). These are images that reproduce some of his famous road works. They document works that have become “popular frescoes” but which deteriorate over time or are stolen or removed.

Banksy has always preferred the horizontal spread of images compared to the creation of unique objects. A lesson borrowed from Andy Warhol with his serial approach and the methodical use of screen printing. The London exhibition “Warhol vs Banksy” at The Hospital in Covent Garden, produced by Banksy in person, confirms an almost hereditary bond.

In 2018 “The girl with the balloon“, a popular work by the self-destructing artist – half – shortly after being beaten for 1.2 million euros at Sotheby’s, in London, will change its name and will be called “Love is in the bin“.

Banksy exhibition in Florence 2018 “This is not a photo opportunity” 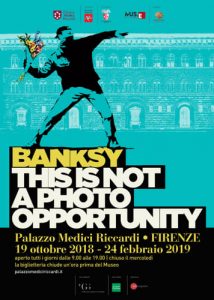 At Palazzo Medici Riccardi will be exhibited his most famous images, those that have gained high popularity even through sharing on social media. To complete the exhibition itinerary, the public will have an infographic on the chronology of the artist. Extensive historical cards on the works with photographic documentation, the original “black books“, original posters of his exhibitions, counterfeit banknotes, “I am an imbecile” balloons used at Dismaland and a selection of videos.

The Florence exhibition is the result of a rigorous selection of the best 20 images produced so far by the artist. Those that have made planetary success one of the most complex, ingenious and intuitive of our time.

The exhibition “Banksy This is not a photo opportunity” is curated by Gianluca Marziani and Stefano Antonelli, promoted and produced by the MetaMorfosi Association, with the patronage of the Metropolitan City of Florence, the support of the Tuscany Region and the collaboration of Muse.

It is the first time that an exhibition examines and analyzes the original images of Banksy within an exhaustive semantic framework that brings its origins, references, relationships among the elements, implications and plans of pertinence.

A hereditary and clear link in the show, the one with the father of Pop Art that was also confirmed by the London exhibition in 2007, “Warhol vs Banksy“, at The Hospital in Covent Garden, produced by Banksy himself. Moreover, as often reiterated by many international brands, Banksy represents the best evolution of the original Pop Art. The only artist who fused serial multiplication, hip hop culture, Eighties graffiti and digital time approaches.

Among the works that can be admired in the exhibition also the famous serigraph “Balloon Girl“. At the center of world attention for its resounding self-destruction, which took place during the Sotheby’s auction in London for over 1 million euros.

How to reach Florence by bus?