The Basel Carnival is called the Swiss folk festival, which starts from 15,000 to 20,000 masked people. 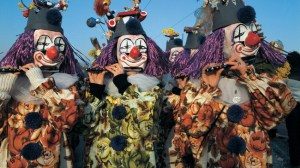 Carnival can magically transform us into what we are not, and gives us the chance to be, for one day only, the fantastic character that we have always dreamed of .

If you are such a spell you add a elegant frame , made of stately buildings, well-kept streets and scenic squares, here the party becomes a worldly occasion unmissable.

Every year a Basel happens, where the Basler Fasnacht presents the biggest party in Switzerland, and counts every year from 15 thousand to 20 thousand participants masked. The celebrations associated with 15.00 of the Monday following Ash Wednesday. It starts with the “ Morgestraich “, a ritual that involves the march of strange characters in disguise, with many small lanterns lit on the head . “The groups of participants called” clique “carry instead of the larger lanterns, of canvas and wood, which exceed three meters in height, illuminate from the inside and from the writing that show an anecdote recorded at the Carnival previous.

The “clique” move through the streets of Basel in the afternoon, respecting the fixed routes, with coordinated costumes and masks, a second of the theme chosen in previous months. In the evening the participants have the task of moving from local to local to perform motions, nursery rhymes, verses and caricatures, commenting on the events of the past year: these small performances are called Schnitzelbänken , while I Guggemuusige are the masked musicians who give the show the Tuesday evening , attracting the attention of the public with a clumsy noise.

But the culmination of the carnival , considered by many the most beautiful moment of the whole event, is considered by the typical Gässle . These are great movie characters, all intent on playing drums and pipes with a crowd of visitors, up to 4.00 in the morning on Thursday following Ash Wednesday.

Where:   center of Basel, Switzerland