Who are the Baustelle? Baustelle Concert, 9th September 2017 Milan 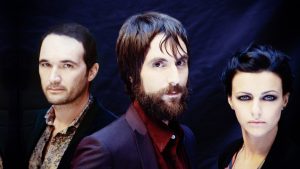 The Baustelle are an Italian Indie rock band formed in 1996 in Montepulciano, Tuscany. Since 2005 the group has three elements: Francesco Bianconi, Rachele Bastreghi and Claudio Brasini. Do not miss Baustelle Concert, 9th September 2017 Milan!

The word Baustelle means in German “construction site”, “work in progress”, chosen by browsing a dictionary after a long search on several foreign texts. Bianconi himself will say that the name was chosen for some curious features. It contains the word “stars”, the ironic onomatopoeic “bau” and “elle”, which in French means “she”. Baustelle Concert, 9th September 2017 Milan!

With the first album Sussidiario Illustrato Della Giovinezza (2000) the group creates a new way of making pop. Intellectual and spotted, curious and fun, full of shades and subtle maladies. In 2003 she released “La Moda Del Lento” and in 2005 La Malavita with the famous songs “La Guerra E ‘Finita” with her sweet flavor, “Revolver” with its noir atmosphere.

The discographyof the Baustelle has been characterized by a growing level of complexity. The parables of the first two albums left the field to the compositional maturity. “Damnation” and “Amen” (for many the Italian album of the year in 2008), up to the ambitious textual and orchestral researches sublime in the “I mistici dell’Occidente” e Fantasma”.

Bastelle will be on September 9th at the club Carroponte of Milan to present their new album “L’amore e la violenza” (Love and Violence) whit its particular sounds.

For these reasons, “L’amore e la violenza” is a disparaging disc, because the Baustelle for the first time are not looking for a new forward impetus. Towards lids not yet explored, but they prefer to go back to territories already skillfully practiced in the past. They keep the obsessive search for the “perfect song,” but risk letting the nose grow in those fans who have grown up with them in the meantime and may no longer find themselves in certain architectures that turn out to be “youthful”. The Baustelle know how to mix sacred and profane, Pasolini and the songs, Diabolik and ‘The fashion of the slow’ and, musically, the ethio-jazz.

How to reach Milan?

Many other destinations on www.linkavel.com