Who is Fernando Botero: an excursus of his career

Botero is the most representative painter of contemporary age. Not just a genial marketing manager of art, but a man capable of imposing a painting style as if it were a brand. You could not immediately recognize a Botero picture. Not to mention that this is perhaps the only case of modern artist finished on postcards, tickets and other business gifts. The 85-year-old Colombian artist is famous for his paintings of unreal forms of human figures. It will be possible to admire his works at the Exhibition Botero 2017, Rome Complesso del Vittoriano until the 27 August 2017. 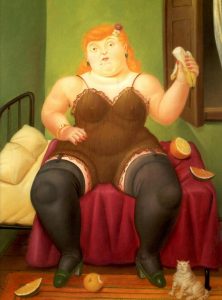 His style is based on the use of so-called dilated forms that give life to “fat figures”. These are a distinctive feature of Botero’s art to make it almost proverbial. Almost anyone will hear about the works of the artist of Medellín in comparison with friends or acquaintances with a few pounds of too much. However, one of the questions that is heard most frequently in the works of Fernando Botero is precisely those forms that are recognizable. “Why Botero paints fat men?” “Why Botero sculpts fat women?” The artist was both struck and viscerally attracted to this form dilated beyond the natural, because it conjured up a deep sensuality. Botero found his style and began to expand the shapes of other objects, animals, human beings. By allowing that “fat” appearance is a bit its trademark. Exhibition Botero 2017, Rome Complesso del Vittoriano!

In his works you can discover a dreamy and fantastic dimension. Among the masterpieces on display in Rome, there will be some of his portraits. Here too the depicted people have come to undergo a kind of dilation, as mentioned above, beyond reality. His style is also recognizable in the animals and plants he painted. While waiting to be able to watch the show closer, we see the directions for those who will visit it.

The exhibition is in the Ala Brasini of Vittoriano and is divided into thematic sections. Old Masters; Still life; Bullfighting; Religion; Policy; Society; Family; Party; Naked; Portraits; Violence in Colombia; Circus; Abu Grahib. It is a monograph of paintings by Colombian artist in the last 30 years of activity. In addition, there are works dating from the 1960s, such as the still life and Renaissance inspiration canvases. Exhibition Botero 2017, Rome Complesso del Vittoriano!

More info about the exhibition

How to reach Rome by bus?