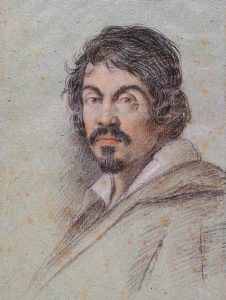 Michelangelo Merisi, called Caravaggio, was born in Milan in 1571 and moved to Rome in 1592 where he started working as a painter. He was admitted to the Hospital of Consolation and painted the famous portraits in the mirror, including the so-called Bacchino malato (Galleria Borghese). He has a great success painting the bari for the Florentine Cardinal Francesco Maria del Monte, of whom he will become a protector. Over the years, Marquis Vincenzo Giustiniani, the Barberini, the Borghese, the Costa, the Massimo and the Mattei were his employers. Exhibition Dentro Caravaggio, Milan!

In 1597 he made the three masterpieces for the Contarelli chapel in San Luigi dei Francesi: the Vocation, the martyrdom of Saint Matthew and St. Matthew and the angel. Between 1600 and 1601, the Crucifixion of Saint Peter and the Conversion of Saint Paul. In both cases, he had to re-paint a canvas, because they refused because of their “irreverence”, which will be repeated with the Death of the Virgin for Santa Maria della Scala and today at the Louvre

In 1608 The painter is in Malta where he is named Knight. A rehabilitation for the unscrupulous life of the artist who had to flee from Rome after killing a man during a fight. Here he performs what is his greatest canvas: the Baptist’s Decollution. In 1609 he was back to Naples where he was seriously injured. Here he performed works like David with the head of Goliath and Salome with Battista’s head.

Waiting to return to Rome to receive the graces, she is arrested on the beach of Port’Ercole. Released becomes ill and dies of “malignant fever”. It was July 18, 1610 Caravaggio was not yet 39 years old, a few days later he will receive grace with permission to return to Rome

The Exhibition Dentro Caravaggio, Milan. From September 29 to January 2018 at Palazzo Reale in Milan

Caravaggio was born in Milan on September 29, 1571. It is no accident that the Inside Caravaggio exhibition is inaugurated on September 29th. A unique exhibition because it will present to the public works from major Italian museums and equally important foreign museums.

Some selected documents from the State Archives of Rome and Siena on the human and artistic events of Caravaggio will also be exhibited, which have profoundly changed the chronology of the early Roman years and created mysterious voids in its activity. There are, in fact, news between the end of his apprenticeship at Simone Peterzano in 1588 and 1592 when he appears in Milan in a notarial act. Just as the arrival in Rome is documented only at the beginning of 1596, and so its mysterious story has remained in these eight years, not a few for a painter who has worked for less than fifteen years.

The set-up will bring not only the emotion and the opportunity to admire the paintings on the canvas, but will also give him the ability to understand the process of realization.

For the first time Caravaggio’s canvases will be flanked by the respective radiographic images that will allow the audience to follow and discover through the innovative use of multimedia equipment the artist’s path from his initial thought to the final completion of the work.

“They are reflections and radiographs, which penetrate to a different extent under the pictorial surface, to help us interpret incidental phenomena invisible to the eye,” explains curator Rossella Vodret. For the instruments already used in the in-depth study of the 22 Roman works of Caravaggio between 2009 and 2012, new diagnostic surveys are added to the other works on display, including those from abroad, thanks to a joint project University of Milan- Bicocca and CNR. Exhibition Dentro Caravaggio, Milan!