Harry Potter The Exhibition is already exhibited in Chicago, Boston, New York, Seattle, Sydney, Singapore, Tokyo, Paris, Shanghai, Brussels and Madrid and will arrive at the Fabbrica del Vapore in Milan from May 12th to September 9th 2018.

James and Oliver Phelps, the actors who lend their faces to the Weasley brothers in the films of the saga, in announcing the 19th stage of the Harry Potter The Exhibition tour, on the occasion of the annual A Celebration of Harry Potter held in Toronto, have exalted the city of Milan as “the ideal place to host the exhibition, because it is a hub of creativity and design”. 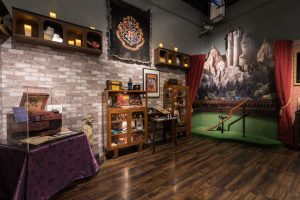 Waiting for the Milanese audience, a collection of thousands of objects from the Harry Potter movie sets: costumes, such as Harry’s school uniform; iconic objects, such as Voldemort’s magic wand; famous locations, such as the common room of Hogwarts ; fantastic creatures, such as the house elf Dobby; and articles for true connoisseurs of the saga, such as the Golden Snitch used in Quidditch games.

Deputy Mayor Anna Scavuzzo spoke at the presentation conference describing Harry Potter The Exhibition as “a bold, ambitious and transgenerational project: it is aimed at all age groups”. “ In May “, he added, “there will be a great opening party accessible for all citizens and not only: tourists will be welcome, also because the exhibition is available both in Italian and in English”.

They will be 1600 square meters that inside the Fabbrica del Vapore will be set up by GES Events, in partnership with Warner Bros. Consumer Products and with D’Alessandro and Galli, Sold Out and Encore Productions.

The contents of the exhibition

The exhibition itinerary, which will also include video material, will have an immersive character and lasts about an hour. Visitors will be welcomed by a landlord who will split some of them according to the favorite Hogwarts house and then accompany them to the exhibition.

Among the most famous locations on show: the Gryffindor dormitory, the classrooms of Potions and Herbology and the Forbidden Forest. There are also many interactive elements: a Quidditch area where you can launch a Quaffle, an area where you can uproot your Mandrake and a hut to sit on Hagrid’s armchair.

To wait for Harry Potter fans, then, real gems like the Talking Hat, Professor Cooman’s crystal ball, the bubbling potions of Professor Snape, the masks of the Death Eaters and the magical creatures of the Forbidden Forest. Finally, the great protagonist of the exhibition will be the Great Hall of Hogwards, which will contain props, artifacts and costumes.

Travel by bus … Any idea?

or discover other destinations.