Where is the Mugello Circuit, Gran Prix MotoGP 2017

The racetrack is located in Tuscany, north of Florence, precisely in the town of Scarperia and San Piero. The structurewa build in 1972, at the initiative of AC in Florence and inaugurated in 1974. It now belongs to the company Ferrari, which restructured heavily, while maintaining unaltered the design of the track, very demanding for pilots. Mugello Circuit, Gran Prix MotoGP 2017! 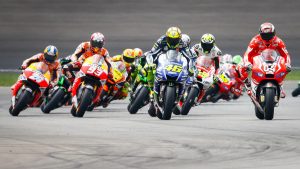 As we said, the track of Mugello is particular and consists of a straight uphill of more than 1km, where the MotoGPs reach a speed of about 340 km/h. In addition, it has several slope changes and very fast, blind and challenging curves, such as “Angry 1” and “Angry 2”. Noteworthy is also the Casanova-Savelli, a right-to-left chicane downhill. Another important point is the “San Donato” curve, the first of the track at the bottom of the above mentioned straight. The technique is to try to curb as late as possible.

The first time Mugello hosted a Grand Prix race was in 1976, but it’s only since 1991 that it is a permanent MotoGP ™ seat. 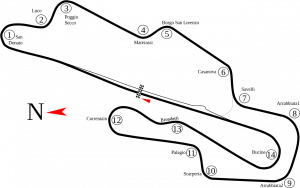 The International Motorcycle Federation has released the provisional list of 23 riders who will race for the Queen class. Four Italians: Valentino Rossi, Andrea Dovizioso, Andrea Iannone and Danilo Petrucci. The Spanish are 10: from the champion Marquez, Dani Pedrosa, Jorge Lorenzo, Barbera, Bautista, Vinales, Aleix, Espargaro, Rins and Rabat. The only non-European is the Australian pilot Jack Miller!

How to reach Barberino di Mugello and Tuscany

Discover all the bus offers on PROMO