From 18 November 2017 to 25 February 2018 the Basilica of San Giovanni Maggiore in Naples hosts the spectacular exhibition “ Van Gogh – The Immersive Experience . “Innovative 3D projections, combined with an exciting soundtrack will allow the visitor to “enter” the paintings of the Dutch master. Van Gogh exhibition in Naples 2018!

The exhibition, produced and distributed internationally by Exhibition Hub and Next Exhibition, seems to confirm the synergy between art and technology that has already been successful with other events such as the exhibition “ Klimt Experience ” at the Royal Palace of Caserta, whose closure was postponed to the first months of 2018. 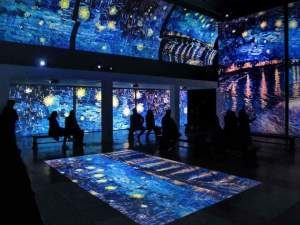 If on the one hand the art purists look doubtful at this new popular form On the other hand, the public seems to appreciate the use of technologies in the artistic field, which allow to show the best known works through a different point of view, which aims to enhance the emotional power of art .

The exhibition, suitable for an audience of all ages, lasts about an hour, during which the walls and ceilings of the Basilica come alive with the unmistakable hues of the Dutch master . You can book your ticket online in advance, choosing a day and a specific time slot. In fact, access to the exhibition foresees a maximum number of visitors for each shift. Van Gogh exhibition in Naples 2018.

Thanks to an innovative 3D mapping system, made possible by fifty high definition projectors , visitors can immerse themselves completely in the works, having the sensation of living them in first person. It is a way to retrace the life of the Dutch painter, living the environments that he himself lived.

An example above all: the bedroom of Arles , the small town in the south of France where van Gogh moved two years before his death, with ‘goal to create a community of artists independent of the dynamics of the market and the rules of the academy. No one adhered, so Vincent’s brother, the art dealer, Theo, was forced to convince Gauguin, paying him handsomely.

Gauguin moved from Vincent unwillingly, so much so that the relationship between the two was more marked by the quarrels than by a sincere friendship. It seems that one of the most famous episodes of the biography of van Gogh, the cutting of the ear , occurred precisely because of a quarrel with Gauguin. It was that incident that convinced Gauguin that it was time to leave Arles forever. Van Gogh exhibition in Naples 2018!

The real protagonists of the exhibition “Van Gogh – The Immersive Experience” are the colors. The fiery yellow of the wheat fields and the blue of the Starry Night paint the walls, columns and ceilings of the Basilica, coloring those ancient walls with the energy of a unique artist. You can admire his works by walking around the hall or even lying on the floor, immersed in a soundtrack that amplifies the emotions.

or check tickets on offer